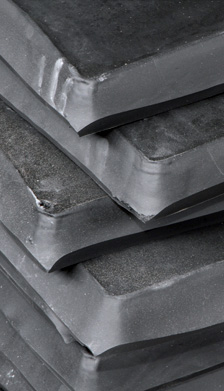 The history of INTEREP began in 1911 when the PFEULMER brothers filed patents concerning the injection of inert gas into a mass of mushy rubber. After registering the patents and setting up a laboratory, a series of tests was conducted in Paris and the foam rubber process “Caoutchouc mousse” was perfected. After the war two commercial factories were formed , one in Belgium and the other in France ( in Aurec sur Loire ) . Following this the two busineeses merged and the equipment from the Belgium was transported to Aurec. This explains the name Société Franco-Belge du Caoutchouc Mousse (SFBCM) , whereas the one and only factory was in France.

IT was in 1982 that SFBCM was bought out by its own customers who remamed the company INTEREP , an acronym meaning International Company for the Transformation and Distribution of Elastomers Plastomers and Derived Products.

Since 1994 INTEREP has been part of the group HCM ( Holding Caoutchouc Mousse ) with the aim of developing its business activity throughout Europe and around the world and attaining a presence in 40 countries with 90% exports.

In 2009 a Chinese subsidiary was established to meet Asian and Oceania market needs with the creation of HCM Shanghai Rubber Prod. Trading.

2013 was a momentous year for INTEREP and the company SOCATEX , both subsidiaries of HCM , as the firms merged under the legal status and commercial name INTEREP.

INTEREP , European leader in the closed cellular rubber market , has registered its development in the international field so as to impose its expertise and know how in the four corners of the globe.

SOCATEX , nearly 70 years of existence and consolidated expertise at the heart of INTEREP

SOCATEX, founded in 1947, was originally a trading company of rubber products and textile hence the name SOCATEX: SOciété rubbers TEXtiles. Very soon SOCATEX has developed its own technology for manufacturing waterproof foam rubber.
In 1992, became a subsidiary of HCM SOCATEX and proceeds for 10 years many real estate and technology investments to become a major player in the global cellular rubber market with 90% of its turnover outside France.